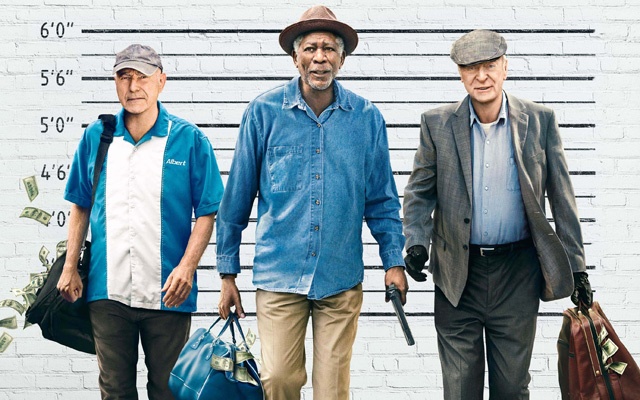 2017 has been an amusement ride of non-stop blockbuster movies. This year, though in its Genesis, has been predicted by critics and producers to be a year of the world’s greatest movie hits. Just when we thought March brought a lot of high octane suspense filled action movies like “Logan”, “Kong: Skull Island”, “Beauty And The Beast”, “Ghost In The Shell” and “Power Rangers”. Just when you think you’ve seen it all, April will leave your mouth agape. Sadly, for fans of “Wolverine”, Hugh Jackman who played “Logan” has called it quits with the X-men franchise.

Although there are fewer anticipated blockbusters except for one particular franchise instalment. However, this April, there are a lot of promising films from comedy to thrillers, action and drama featuring some of Hollywood’s top players like Morgan Freeman, Alan Arkin, Dwayne Johnson, Tom Hanks, Vin Diesel, Octovia Spencer, Emma Watson, Victoria Justice, Lindsay Duncan, Jeremy Slater, Michelle Rodriguez, McKenna Grace, Chris Evans & many more. Without further ado, let’s take a quick look at the top 10 movies arriving in the theatres this April;

This is a 2017 American heist comedy film directed by actor and comedian Zach Braff notably known for “Scrubs” and written by Theodore Melfi who also wrote, co-produced and directed “Hidden Figures”. It is a remake of the 1979 film of the same name. The movie stars an ensemble cast of legendary actors: Michael Caine, Morgan Freeman and Alan Arkin.

The movie follows three senior citizens who turn to bank robbery to recoup the funds they have lost due to their cancelled pensions. We assume that the film is going to be hilarious. It is definitely one of the movies to watch out for this April. It is set to be released on April 7.

It is 2017 American 3D computer-animated adventure-comedy film produced by Sony pictures. It based on “The Smurfs” comic book series. It is written by Stacey Harman and Pamela Ribon and directed by Kelly Asbury. It is the third movie in Smurfs franchise. The film stars former Disney star and musician Demi Lovato as Smurfette, Mandy Patinkin, Joe Manganiello (Magic Mike) and Rainn Wilson. A mysterious map sets Smurfette and her best friends on an exciting and thrilling adventure through the forbidden forest. Fans will love this new-take on the Smurfs. It is set to be released on April 7.

It is a crime-thriller film directed by Walter Hill and co-written by Denis Hamill. The film stars action lady Michelle Rodriguez (Fast and Furious), Sigourney Weaver, Tony Shalhoub, Anthony LaPaglia, Terry Chen, Paul McGillion and Caitlin Gerard. Hitman, Frank Kitchen (Michelle Rodriguez) is given a lethal assignment, but after being double-crosssed, he discovers he’s not the man he thought he was that he has been surgically altered and now has the body of a woman. Seeking vengeance, Frank heads for a showdown with the person who transformed him. This story line is quite uncommon but promises to be really interesting. It is set to be released on April 7.

The story is about a single man raising his young niece who happens to be a child prodigy in a coastal town in Florida. He wants a normal school life for her but when her mathematical abilities come to the attention of his formidable mother, her plans threaten to separate them. It is scheduled to be released on April 12.

• THE FATE OF THE FURIOUS

Drumrolls Please. Fans have been itching for this one for the eight instalment in the fast of furious franchise which is coming to a cinema near you this April. Everyone, grab a ticket and popcorn and get ready for the ride of your life. “The Fate of the Furious” also known as “F8” is an upcoming 2017 action film directed by F. Gary Gray and written by Chris Morgan. The film stars an ensemble cast of the previous films and also some new faces to the films but not to Hollywood.

It stars Vin Diesel, Dwayne Johnson, Jason Statham, Michelle Rodriguez, Tyrese Gibson, Chris Bridges, Nathalie Emmanuel, Kurt Russell, Scott Eastwood, Charlize Theron and Helen Mirren. The Fate of the Furious marks the first film not to star Paul Walker. Dom and Letty are on their honeymoon, Brian and Mia have retired from the game and the rest of the crew has been exonerated. But when a mysterious woman seduced Dom back into the world of crime he can’t seem to escape and a betrayal of those closest to him, they will face trials that will test them as never before. To be released on April 14.

It is a 2017 action adventure biographical film written and directed by James Gray based on the 2009 book of the same name by David Grann. It stars Charlie Hunnam (Pacific Rim), Robert Pattinson (Twilight) and Sienna Miller. The film describes real events about British explorer Percy Fawcett who made several attempts to find the ancient lost city in the Amazon and disappeared in 1925 along with his son on an expedition. The film is set is be released on April 14.

It is an upcoming American thriller film directed by Denise Di Novi and written by Christina Hodson and David Leslie Johnson. The film stars Katherine Heigl, Rosario Dawson, Geoff Stults, Isabella Rice and Cheryl Ladd. Tessa Connover is barely coping with her divorce when her ex-husband becomes engaged to Julia.

Trying to settle into a new role as a wife and a step-mother, Julia believes she has met the man of her dreams. Tessa’s jealousy takes a pathological turn and will stop at nothing to turn Julia’s dream into a nightmare. To be released on April 21.

A young tech worker takes a job at a powerful tech company quickly rises above ranks and soon finds herself at a perilious situation. She comes to learn her decisions and actions will determine the future for the humanity. To be released April 28.

• HOW TO BE A LATIN LOVER

It is a comedy film directed by Ken Marino and written by Chris Spain. The film stars Eugenio Derbez, Salma Hayek, Rob Lowe, Kristen Bell, Raphael Alejandro, Raquel Welch and Rob Riggle. Finding himself dumped after 25 years of marriage to an 80 year old woman, a man who made a career out of seducing rich older women must move in with his estranged sister, where he begins to learn the values of family. To be released on April 28.

Those are the movies you must see this month. An amazing collection no doubt put together by NAOMI IGBINOBA as always. This is Danny world’s first review for the year and we’re back with a bang. We apologise to our movie faithfuls for not reviewing since January. I assure you, it wasn’t intentional. But we’re back, bigger and better now. Expect more amazing reviews from us this year. Enjoy the movies at the cinemas this month. Until next time, this is Danny world…

God offers you a resting place in His luxurious love. An Oasis awaits when you let go and let God.

Things are created,Bliss is concocted!